Traffic In Tampa Bay Is Picking-Up. Is Your Small Business Ready?

More than 93% of Tampa Bay households own at least one vehicle.

Pre-pandemic, 86% of workers spent, on average, 60 minutes every weekday in these cars commuting to-and-from their jobs.

On their way to work, many of these drivers would contribute to Tampa Bay's $59.3 billion retail economy by visiting the convenience stores, coffeehouses, auto repair centers, gas stations, daycares, grocery stores, or hundreds of other businesses they passed.

At lunchtime, these same cars would take their owners to restaurants, dentist appointments, nail appointments, barbershops, and on an infinite number of other errands.

Then on April, when the Governor of Florida shut down the state to slow the spread of COVID-19, traffic came to a standstill and so did the spending.

There are strong indications, though, that in the Tampa area, roads are filling up again.

Apple's Mobility Index, a measure of daily requests for driving directions, indicates local traffic is returning to normal. This is great news for Tampa Bay small business owners who depend on drive-in customers. 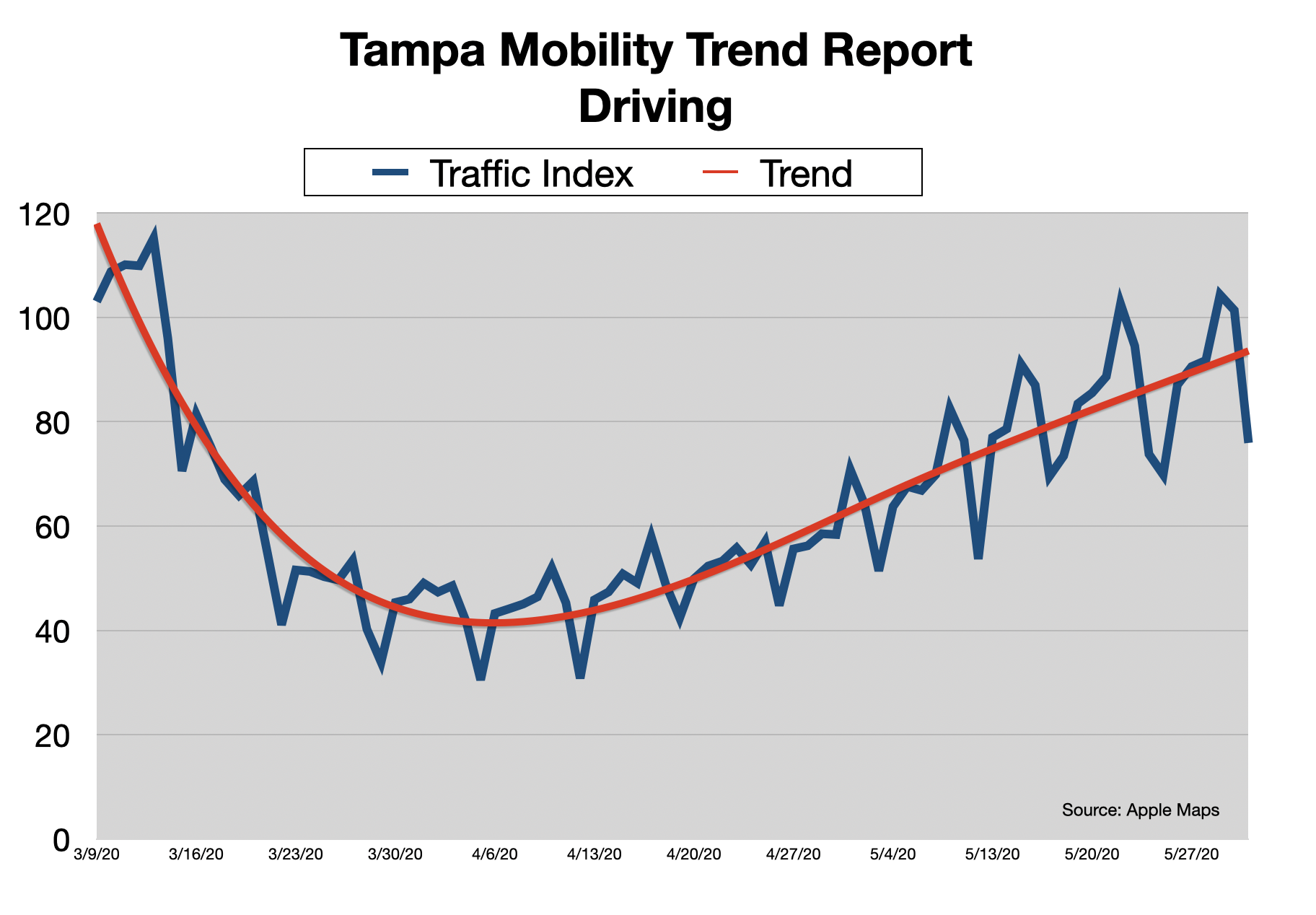 To convert street traffic to store-traffic, however, it takes more than turning on the lights and hanging an open-sign on the door. It requires small business owners to advertise to alert consumers that they have withstood the crisis and are open. Also, customers need to know what measures have been put in place to ensure their safety while shopping.

By almost any metric, advertising on Tampa radio is the best solution for bringing customers back in.

First of all, according to a Nielsen study, the most important media consideration when buying advertising is reach. Next to the actual content of an ad, the number of people exposed to a commercial is the single greatest driver of sales. 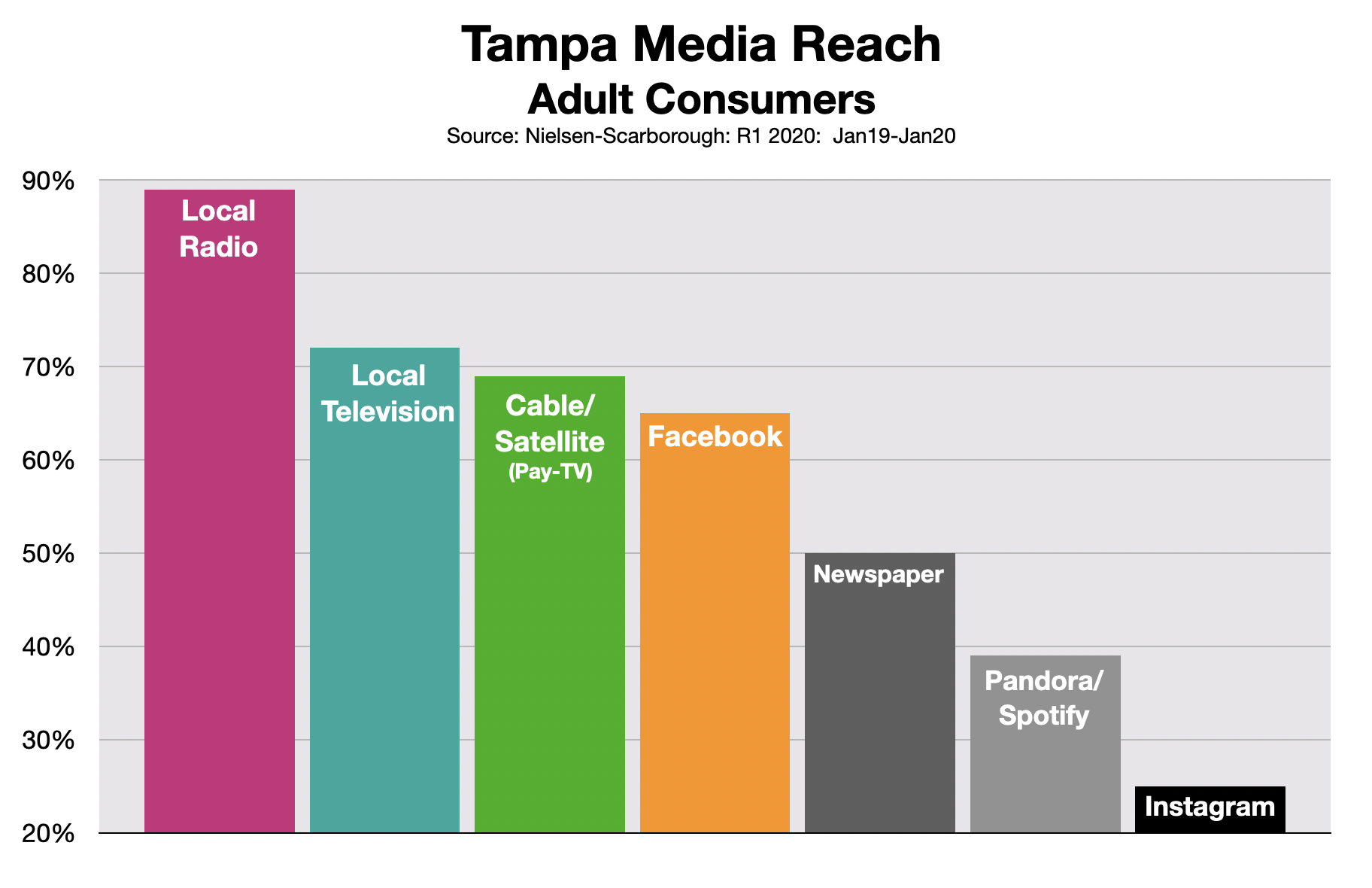 More importantly, while in the car, adult consumers overwhelmingly choose to listen to a Tampa radio station. According to a 2020 study by Edison Research, 81% of adult drivers say that they used AM/FM radio. Their second choice is their personal MP3 music collection.

According to an article published by WARC, a company that collaborates with more than 50 respected marketing organizations, including the Advertising Research Foundation and the Association of National Advertisers, reaching consumers in car has a powerful effect on buying behavior.

"Radio ads heard in the car on the way to the store have a significant effect on purchasing intentions according to new research on fast moving consumer goods (FMCG) advertising," says WARC.

The study, conducted by Touchpoint indicate that these radio commercials heard in the car increased purchased intent among loyal customers by 38%.

AdAge magazine reports that companies that advertise on radio experience a higher return-on-investment than from ads place on television, online, or in social media.

Based on more than 20 ROI studies conducted by Nielsen, business owners, on average, earned $1000 in sales for every $100 invested in radio commercials.

As traffic builds on local roads, advertising on Tampa radio proves to be an effective way to turn drivers into customers.