Is Your Tampa Bay Small Business Ready For Back-To-School? 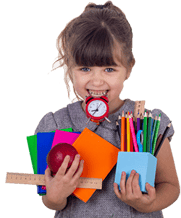 The National Retail Federation has predicted that this year's back-to-school shopping season will set a new record. Households with school-age children are expected to spend, on average, $696.70 preparing their kids for the first day of classes. This tops the previous record set in 2012.

For Tampa Bay small business owners, this means there is $560,193,514 of back-to-school bucks in play between now and the first bell of the school year.

To grab the largest share of back-to-school spending will require small business owners to advertise.  By any metric, advertising on Tampa radio stations will be the most effective.  Here's why.

According to Nielsen, the number of people reached by an advertising campaign is the media factor that makes the most significant contribution to driving sales.  Reach is more important than branding, targeting or recency.

Advertising on Tampa Bay radio reaches more households with at least one kid living at home than local TV, local newspaper, streaming audio sites like Pandora or Spotify, and Sirius/XM. 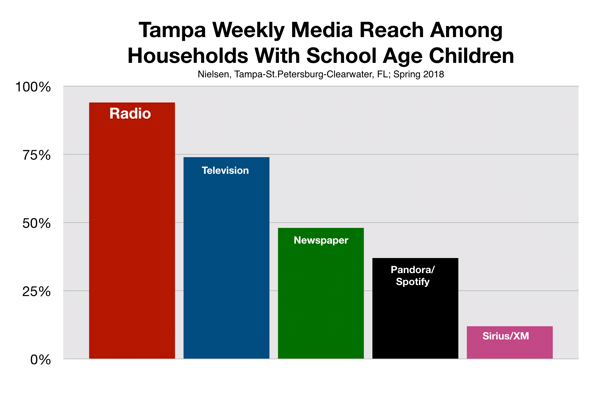 Local radio also reaches far more consumers each month than all categories of websites and apps.

According to the NRF, it's not just mom and dad making the buying decisions.

“Members of Generation Z are clearly becoming more involved with back-to-school purchasing decisions rather than leaving the choices up to mom and dad,” NRF President and CEO Matthew Shay said. “Over the years, both teens and pre-teens are spending more of their own money on back-to-school items.”

Radio advertising is the best way to reach 12-17 year olds as well. The chart below puts into clear perspective how radio fits into a teen's media life.

Teens just don't listen to the radio. They immerse themselves in radio. Each day, according to Nielsen, teens spend 4 hours and 32 minutes consuming media. Twenty-five percent of that time is spent with radio.

To learn more about the NRF's 2019 prediction for the upcoming back-to-school shopping season, click here.